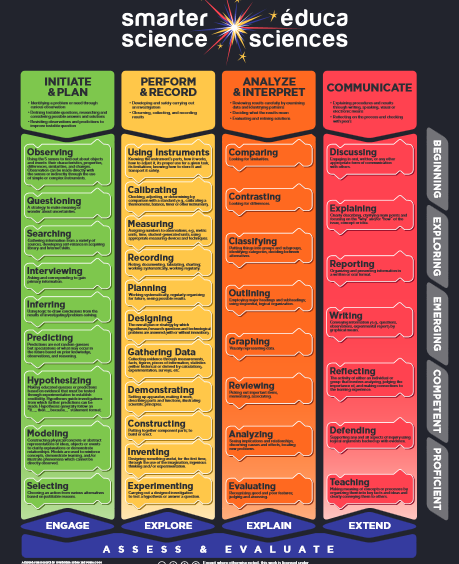 [Science 8, Science 9, Physics 11]  Friday was a PRO-D for everyone in BC. I attended the BC Science Teachers Association conference. The keynote speaker was a forensic etymologist from SFU. She spoke about her studies/profession. While I found it mildly interesting, I have no idea why that was the keynote. I think I could have spent an hour doing a keynote on how Course Planning is a lot like Quality Assurance programs. Or something. Anything, really.

I had signed up for two sessions with the Smarter Science people. Smarter Science is a framework for conducting inquiry in the science classroom, and the gradual release of responsibility that goes with inquiry. I wasn’t sure how much I’d get out of it, as I have been trying to incorporate inquiry for a few years now. However, it turns out that the morning session was just what I needed. We worked through their framework by using an example. The example was eerily similar to an inquiry session I did with my grade 8 students (dissolving starch packing peanuts). The difference is that Smarter Science provides a concrete framework around the work. We had done the same steps, but each step wouldn’t have been so clear to my students. Our inquiry was more like living in the moment, whereas if I had the framework in place the students would have had a better vehicle for reflecting on the work that they had done.

I would encourage all science teachers to take a look at the Smarter Science website: http://smarterscience.youthscience.ca/