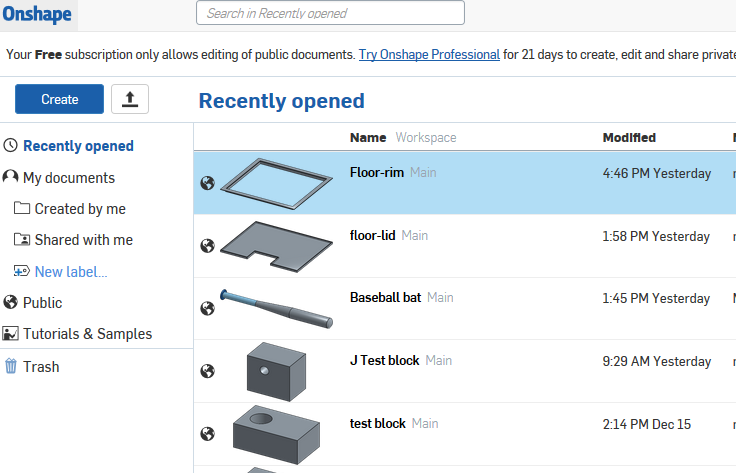 Engineering Physics – I had students sign up for onshape.com as this is the program that I would prefer that they use this year. Today is our last class for the year but once kids got started on onshape, they were very engaged.

A little bit of history on me… I was a mechanical engineer for 15 years and did a lot of 3D modeling. I was first introduced to Pro Engineer in 1994. Pro/E ran on $15,000 unix stations and the software was $11,000. We also used AutoCAD on our desktop PC. A few years later I was using Solidworks on the PC. Solidworks had a typical windows UI and a $4000 license, and was a huge improvement for users imo.

Years later I wanted to do some 3D modeling at home. Solidworks was selling a $100 educator license but the license expires after 1 year, so that was too expensive. Pro/E had its educator software for $100 with no expiry date, so I purchased. It worked ok, but I was shocked at how “unix like” it still was. I think this was around 2010.

In 2014 I took another look at 3D modeling software and found out that Autodesk was giving free licenses to educators for its Inventor Pro software. I installed it and was blown away. It seemed like it was pretty much a copy of Solidworks and it was free. Fantastique! The only downside was its huge hard drive space needed – something like 30 GB. I guess I could get it down by uninstalling certain features. But HD space is a bit of an issue these days now that my notebooks have smaller SSD drives.

This past year I started reading about AutoDesk Fusion 360, which is a cloud based solid modeling package. It is based off of Inventor, it’s free, and it has pretty much all of the features I need without taking up HD space. Doing some searches then led me to Onshape. Onshape is similar to Fusion 360, and it was created by the folks who made Solidworks. I checked it out and liked it even more. So Onshape it is!

There a many other 3D modeling programs out there, some are surface modelers (Sketch Up) and some are solid modelers. I would stay away from surface modelers especially if you are going to do 3D printing. Some of these packages are a lot simpler than Onshape but I’m not sure they are any easier to use. At the end of the day, you have to: sketch on a plane, extrude your sketch, do more sketches and do more extrusions and cuts. So I’m only going to explicitly teach Onshape but of course I will help students if they want to try some other software (at their own peril).