Engineering Physics – I don’t want to flog a dead horse with the 3D printing, but it is what we’ve been working with… Here is a collection of the different laser holder designs that the students made.

There are fairly large flaws in all of them, mostly because I didn’t give them all the info they needed to design a fully functioning holder.  In general they made a housing for the laser, but there is nothing in the design of the housings that makes them, in turn, good for holding!  And to be honest, I didn’t really want to go down that road. I just wanted them to have some experience with mechanical design and modeling, which worked out. If this course runs again next year, I have many ideas on how to improve this project and have it work more seamlessly with the cart launcher that preceded it. More to come!

Engineering Physics – The first couple of groups starting printing their designs today. We are all learning with this process together. I wasn’t sure what kind of resolution we would get with the printers and it looks like many of the students are designing features that are less than 1mm in size. I know the resolution of the printers is better than 1mm but I don’t think it is good enough to print extrusions that are 1mm in size. It’s close though. This should lead to some good lessons on tolerances and limits of fabrication. 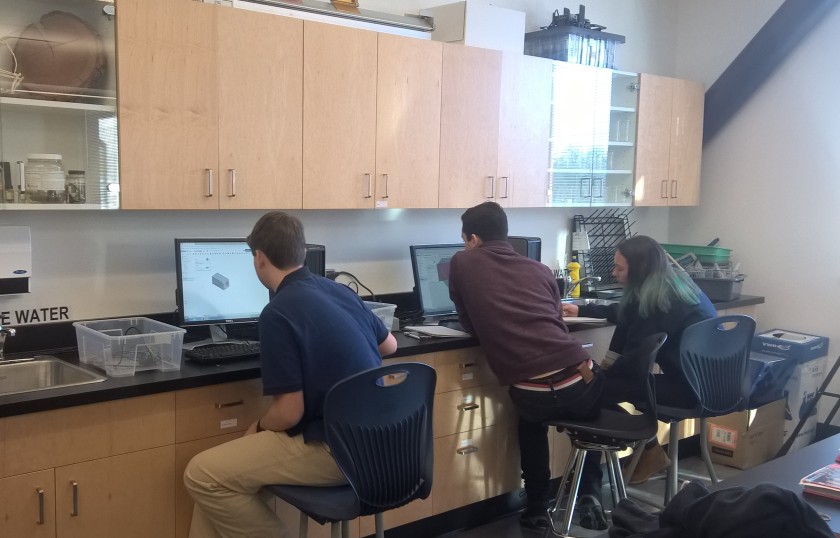 Engineering Physics – The class enthusiastically continued with designing mounts for the lasers and sensors for the cart timers. Some kids are really flying with using Onshape, it’s incredible what engagement can draw out from students.

Engineering – I came in over the holidays to finish fixing and setting up my room’s 2 Printrbot Simple 3D printers.

They say it’s important to step away from teaching while on holidays in order to not burn out. I’ve been looking forward to this though, I’m interested in the technology and wanted the time to focus on getting them going.

I haven’t printed much yet. I had to swap out a z-axis, replace and cooling fan and then calibrate the z-axis sensor. I then printed a spacer part that the spools of PLA will sit on. So far things are going ok. Perhaps I will come in again to test print a model of a Greenland paddle, as part of a project I’m designing for Math 8.

Engineering Physics – I had students sign up for onshape.com as this is the program that I would prefer that they use this year. Today is our last class for the year but once kids got started on onshape, they were very engaged.

A little bit of history on me… I was a mechanical engineer for 15 years and did a lot of 3D modeling. I was first introduced to Pro Engineer in 1994. Pro/E ran on $15,000 unix stations and the software was $11,000. We also used AutoCAD on our desktop PC. A few years later I was using Solidworks on the PC. Solidworks had a typical windows UI and a $4000 license, and was a huge improvement for users imo.

Years later I wanted to do some 3D modeling at home. Solidworks was selling a $100 educator license but the license expires after 1 year, so that was too expensive. Pro/E had its educator software for $100 with no expiry date, so I purchased. It worked ok, but I was shocked at how “unix like” it still was. I think this was around 2010.

In 2014 I took another look at 3D modeling software and found out that Autodesk was giving free licenses to educators for its Inventor Pro software. I installed it and was blown away. It seemed like it was pretty much a copy of Solidworks and it was free. Fantastique! The only downside was its huge hard drive space needed – something like 30 GB. I guess I could get it down by uninstalling certain features. But HD space is a bit of an issue these days now that my notebooks have smaller SSD drives.

This past year I started reading about AutoDesk Fusion 360, which is a cloud based solid modeling package. It is based off of Inventor, it’s free, and it has pretty much all of the features I need without taking up HD space. Doing some searches then led me to Onshape. Onshape is similar to Fusion 360, and it was created by the folks who made Solidworks. I checked it out and liked it even more. So Onshape it is!

There a many other 3D modeling programs out there, some are surface modelers (Sketch Up) and some are solid modelers. I would stay away from surface modelers especially if you are going to do 3D printing. Some of these packages are a lot simpler than Onshape but I’m not sure they are any easier to use. At the end of the day, you have to: sketch on a plane, extrude your sketch, do more sketches and do more extrusions and cuts. So I’m only going to explicitly teach Onshape but of course I will help students if they want to try some other software (at their own peril).