Science 9 – I’ve had significant problems with one of my grade 9 classes this year.  There is constant chatter above what is acceptable, lots of off-task behaviour and people talking out of turn.  However, I recently have discovered a way to deal with them.  I have reduced the amount I speak to them to the absolute minimum. I’ve never spent a lot of time talking in front of the class but I’ve realized is that even the minimum is too much. What I do now is put some basic instructions on the screen at the beginning of class and let the students start their work or investigations.

Today’s class I started with instructions to produce a concept map based on readings from the textbook. There is a lot of text in this section with lots of vocabulary and concepts.  Before too long I was prompted to speak in front of the class because of a need they had, not me.  They weren’t sure how to do a concept map, so I briefly worked through the main points. The students worked very hard for the rest of the class.  There were several good concept maps produced: 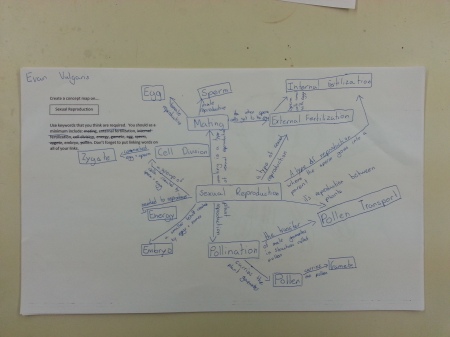